Begin by taking some familiar object and placing it before you, try to get as many impressions regarding it as is possible for you. Study its shape, its color, its size, and the thousand and one little peculiarities about it that present themselves to your attention. In doing this, reduce the thing to its simplest parts−−analyze it as far as is possible−−dissect it, mentally, and study its parts in detail. The more simple and small the part to be considered, the more clearly will the impression be received, and the more vividly will it be recalled. Reduce the thing to the smallest possible proportions, and then examine each portion, and mastering that, then pass on to the next part, and so on, until you have covered the entire field. Then, when you have exhausted the object, take a pencil and paper and put down as nearly as possible all the things or details of the object examined. When you have done this, compare the written description with the object itself, and see how many things you have failed to note. 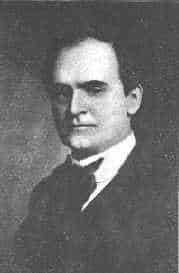 William Walker Atkinson was born in Baltimore, Maryland on December 5, 1862, to William and Emma Atkinson. He began his working life as a grocer at 15 years old, probably helping his father. He married Margret Foster Black of Beverly, New Jersey, in October 1889, and they had two children. The first probably died young. The second later married and had two daughters.

Atkinson pursued a business career from 1882 onwards and in 1894 he was admitted as an attorney to the Bar of Pennsylvania. While he gained much material success in his profession as a lawyer, the stress and over-strain eventually took its toll, and during this time he experienced a complete physical and mental breakdown, and financial disaster. He looked for healing and in the late 1880s he found it with New Thought, later attributing the restoration of his health, mental vigor and material prosperity to the application of the principles of New Thought. 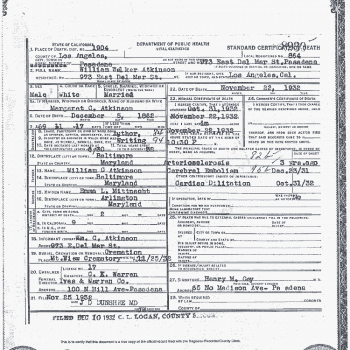 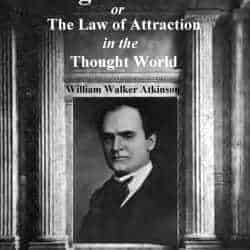 Some time after his healing, Atkinson began to write articles on the truths he felt he had discovered, which were then known as Mental Science. In 1889, an article by him entitled “A Mental Science Catechism,” appeared in Charles Fillmore’s new periodical, Modern Thought.

By the early 1890s Chicago had become a major centre for New Thought, mainly through the work of Emma Curtis Hopkins, and Atkinson decided to move there. Once in the city, he became an active promoter of the movement as an editor and author. He was responsible for publishing the magazines Suggestion (1900–1901), New Thought (1901–1905) and Advanced Thought (1906–1916).

In 1900 Atkinson worked as an associate editor of Suggestion, a New Thought Journal, and wrote his probable first book, Thought-Force in Business and Everyday Life, being a series of lessons in personal magnetism, psychic influence, thought-force, concentration, will-power, and practical mental science.

He then met Sydney Flower, a well-known New Thought publisher and businessman, and teamed up with him. In December, 1901 he assumed editorship of Flower’s popular New Thought magazine, a post which he held until 1905. During these years he built for himself an enduring place in the hearts of its readers. Article after article flowed from his pen. Meanwhile he also founded his own Psychic Club and the so-called “Atkinson School of Mental Science”. Both were located in the same building as Flower’s Psychic Research and New Thought Publishing Company.

Atkinson was a past president of the International New Thought Alliance.

Publishing career and use of pseudonyms

Throughout his subsequent career, Atkinson was thought to have written under many pseudonyms. It is not known whether he ever confirmed or denied authorship of these pseudonymous works, but all of the supposedly independent authors whose writings are now credited to Atkinson were linked to one another by virtue of the fact that their works were released by a series of publishing houses with shared addresses and they also wrote for a series of magazines with a shared roster of authors. Atkinson was the editor of all of those magazines and his pseudonymous authors acted first as contributors to the periodicals, and were then spun off into their own book-writing careers—with most of their books being released by Atkinson’s own publishing houses.

One key to unravelling this tangled web of pseudonyms is found in “Advanced Thought” magazine, billed as “A Journal of The New Thought, Practical Psychology, Yogi Philosophy, Constructive Occultism, Metaphysical Healing, Etc.”

This magazine, edited by Atkinson, advertised articles by Atkinson, Yogi Ramacharaka, and Theron Q. Dumont—the latter two were later credited to Atkinson—and it had the same address as The Yogi Publishing Society, which published the works attributed to Yogi Ramacharaka. 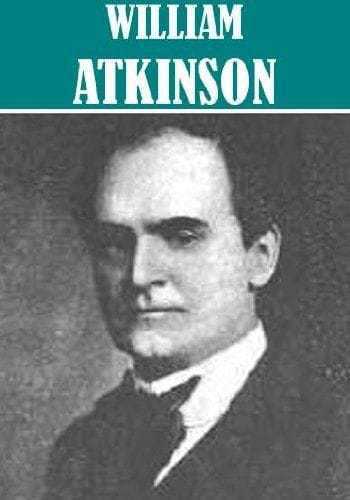 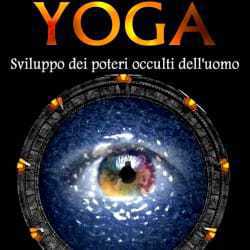 In the 1890s, Atkinson had become interested in Hinduism and after 1900 he devoted a great deal of effort to the diffusion of yoga and Oriental occultism in the West. It is unclear at this late date whether he actually ever converted to any form of Hindu religion, or merely wished to write on the subject. If he did convert, he left no record of the event.

According to unverifiable sources, while Atkinson was in Chicago at the World’s Columbian Exposition in 1893, he met one Baba Bharata, a pupil of the late Indian mystic Yogi Ramacharaka (1799 – c.1893). As the story goes, Bharata had become acquainted with Atkinson’s writings after arriving in America, the two men shared similar ideas, and so they decided to collaborate. While editing New Thought magazine, it is claimed, Atkinson co-wrote with Bharata a series of books which they attributed to Bharata’s teacher, Yogi Ramacharaka. This story cannot be verified and—like the “official” biography that falsely claimed Atkinson was an “English author”—it may be a fabrication.

No record exists in India of a Yogi Ramacharaka, nor is there evidence in America of the immigration of a Baba Bharata. Furthermore, although Atkinson may have travelled to Chicago to visit the 1892 – 1893 World’s Columbian Exposition, where the authentic Indian yogi Swami Vivekananda attracted enthusiastic audiences, he is only known to have taken up residence in Chicago around 1900 and to have passed the Illinois Bar Examination in 1903.

Atkinson’s claim to have an Indian co-author was actually not unusual among the New Thought and New Age writers of his era. As Carl T. Jackson made clear in his 1975 article The New Thought Movement and the Nineteenth Century Discovery of Oriental Philosophy, Atkinson was not alone in embracing a vaguely exotic “orientalism” as a running theme in his writing, nor in crediting Hindus, Buddhists, or Sikhs with the possession of special knowledge and secret techniques of clairvoyance, spiritual development, sexual energy, health, or longevity.

The way had been paved in the mid to late 19th century by Paschal Beverly Randolph, who wrote in his books Eulis and Seership that he had been taught the mysteries of mirror scrying by the deposed Indian Maharajah Dalip Singh. Randolph was known for embroidering the truth when it came to his own autobiography (he claimed that his mother Flora Randolph, an African American woman from Virginia, who died when he was eleven years old, had been a foreign princess) but he was actually telling the truth—or something very close to it, according to his biographer John Patrick Deveney—when he said that he had met the Maharajah in Europe and had learned from him the proper way to use both polished gemstones and Indian “bhattah mirrors” in divination.

In 1875, the year of Randolph’s death, the Ukrainian-born Helena Petrovna Blavatsky founded the Theosophical Society, by means of which she spread the teachings of mysterious Himalayan enlightened yogis, the Masters of the Ancient Wisdom, and the doctrines of the Eastern philosophy in general. After this pioneer work, some representatives from known lineages of Indian and Asian spiritual and philosophical tradition like Vivekananda, Anagarika Dharmapala, Paramahansa Yogananda, and others, started coming to the West.

In any case, with or without a co-author, Atkinson started writing a series of books under the name Yogi Ramacharaka in 1903, ultimately releasing more than a dozen titles under this pseudonym. The Ramacharaka books were published by the Yogi Publication Society in Chicago and reached more people than Atkinson’s New Thought works did. In fact, all of his books on yoga are still in print today.

Atkinson apparently enjoyed the idea of writing as a Hindu so much that he created two more Indian personas, Swami Bhakta Vishita and Swami Panchadasi. Strangely, neither of these identities wrote on Hinduism. Their material was for the most part concerned with the arts of divination and mediumship, including “oriental” forms of clairvoyance and seership. Of the two, Swami Bhakta Vishita was by far the more popular, and with more than 30 titles to his credit, he eventually outsold even Yogi Ramacharaka.

In 1903, the same year that he began his writing career as Yogi Ramacharaka, Atkinson was admitted to the Bar of Illinois. Perhaps it was a desire to protect his ongoing career as a lawyer that led him to adopt so many pseudonyms—but if so, he left no written account documenting such a motivation.

How much time Atkinson devoted to his law practice after moving to Chicago is unknown, but it is unlikely to have been a full-time career, given his amazing output during the next 15 years as a writer, editor, and publisher in the fields of New Thought, yoga, occultism, mediumship, divination, and personal success.

The high point of his prodigious capacity for production was reached in the late 1910s. In addition to writing and publishing a steady stream of books and pamphlets, Atkinson started writing articles for Elizabeth Towne’s New Thought magazine Nautilus, as early as November 1912, while from 1916 to 1919, he simultaneously edited his own journal Advanced Thought. During this same period he also found time to assume the role of the honorary president of the International New Thought Alliance.

Among the last collaborators with whom Atkinson may have been associated was the mentalist C. Alexander, “The Crystal Seer,” whose New Thought booklet of affirmative prayer, “Personal Lessons, Codes, and Instructions for Members of the Crystal Silence League”, published in Los Angeles during the 1920s, contained on its last page an advertisement for an extensive list of books by Atkinson, Dumont, Ramacharaka, Vishita, and Atkinson’s collabrator, the occultist L. W. de Laurence. 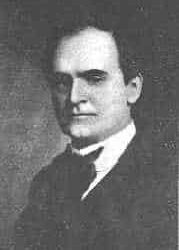 Atkinson died November 22, 1932 in Los Angeles, California at the age of 69, after 50 years of simultaneously successful careers in business, writing, occultism, and the law.

Many mysteries still surround Atkinson’s life, including the fact that a certificate of copyright issued three years after his death is said to have been signed by the author himself. 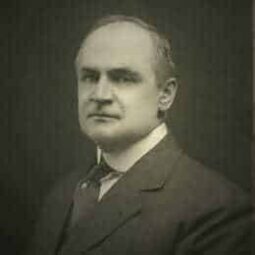