Friedrich Max Müller, commonly recognised as Max Müller, was a German-born Sanskrit scholar, philologist, and Orientalist. He specially focussed on Sanskrit philology and different religions of India and is considered an avant-garde in the areas of comparative religion, comparative mythology, comparative philosophy and particularly Vedic studies. He is counted among the founders of the western academic field of Indology. Müller also remained one of the early influential scholars who developed the academic field of Religious Studies. The monumental 50-volume set of English translations of Asian religious texts called ‘Sacred Books of the East’ was edited by him. Apart from editing, scholarly works of Müller that were published as an 18-volume Collected Works included English translation of several age-old and revered Asian philosophical and religious texts. Some of the important ones include his work on the Upanishads, the Rig Veda and Buddhist text Dhammapada. He spent most of his life in Great Britain where he served Oxford University for 25 years. He initially joined the university as deputy Taylorian professor of modern European languages and later attained full professorship. The university eventually made him Professor of Comparative Philology, a post created for him that he held until his death.

Friedrich Max Müller was born on December 6, 1823, in Dessau, Duchy of Anhalt, German Confederation to German lyric poet Wilhelm Müller and Adelheid Müller (née von Basedow). His god father was German composer, guitarist, pianist, conductor and critic Carl Maria von Weber. He was named after his eldest maternal uncle Friedrich as also after the main character of his father’s opera ‘Der Freischütz’ called Max. Many official documents including his marriage certificate and university register records his name as Maximilian.

He started attending a Dessau gymnasium (grammar school) from six years of age and following his father’s death in 1829, he was enrolled at the Nicolai School at Leipzig. He continued to study music and classical literature there and got introduced to Felix Mendelssohn.

Müller earned a scholarship that led him to enrol at the Leipzig University in 1841. There he studied philology instead of continuing with music and poetry. He obtained his Doctor of Philosophy degree from the university in 1843 submitting his final dissertation ‘On the Third Book of Spinoza’s Ethics, De Affectibus.’ He also learnt classical languages including Sanskrit, Persian, Arabic, Latin and Greek.

Müller went to Berlin in 1844 to study with German philosopher Friedrich Schelling. There he had the opportunity to go through the Chambers collection of Sanskrit manuscripts. He translated some vital passages of the ancient Sanskrit texts called the Upanishads on Schelling’s request and made research on Sanskrit under German linguist Franz Bopp, recognised for comprehensive comparative work on Indo-European languages.

Schelling’s lectures influenced intellectual development of Müller to a great extent. The former also guided Müller in relating the history of language to the history of religion. Müller stressed the need of studying age-old hymns of the Veda to comprehend the Vedic age development of Indian mind. His first book, a German translation of the Sanskrit language Indian text ‘Hitopadesa’ consisting of fables, was published in 1844.

He relocated to Paris in 1845 to further his studies in Sanskrit under French scholar, Indologist and orientalist Eugène Burnouf. The latter inspired Müller to work on preparing and publishing a complete edition of one of the four Vedas, the Rig Veda, by using manuscripts that can be found in England. The following year Müller shifted to England to go through Sanskrit texts available in the library of the East India Company. Initially he sustained himself with creative writings like his novel ‘German Love’ that became quite popular.

He was inducted at the Oxford University in 1850 as deputy Taylorian professor of modern European languages. He became an honorary M.A. as well as member of the college of Christ Church, Oxford at the recommendation of English classical scholar and clergyman Thomas Gaisford in 1851.

Müller garnered full professorship in Oxford in 1854 and earned full degree of M.A. by Decree of Convocation. He was selected to a life fellowship at a constituent college of the university called All Souls College. Although he was more qualified and eligible than Oxford-educated Englishman Monier Monier-Williams, Müller was quite disappointed to face defeat against the latter during the 1860 election for the Boden Professor of Sanskrit.

The position of Professor of Comparative Philology was created for Müller in Oxford in 1868. Müller retired from active duty of the post in 1875, however held the position till his death in 1900.

Müller, with time, evolved as a prominent intellectual commentator on the diverse Indian Culture. He expressed a need for “reformation” within Hinduism as compared to the Christian Reformation. He had connections with Brahmo Samaj, the societal component of the religious movement in India called Brahmoism, and used such connections to promote reformation in accordance with the reforms championed by Ram Mohan Roy.

He focussed on studying the Vedic language Sanskrit that was considered the oldest of the Indo-European languages, and emerged as a prominent Sanskrit scholar of his era.

He studied the Rig Veda and was quite fascinated by his contemporary Ramakrishna Paramhansa, an Indian Hindu mystic, saint and advocate of Vedantic philosophy. He portrayed Ramakrishna as “…a Bhakta, a worshipper or lover of the deity, much more than a Gñânin or a knower” and penned down many essays and books on him.

According to Müller study of language had connection with study of culture as the former had been applied in the latter. He believed that growth of languages must be linked with development of belief-systems and the philosophy of Upanishads could be associated with henotheism.

He convinced the British East India Company to let him work on a critical edition of the Rig-Veda. He worked on the same for decades from 1849 to 1874. It is regarded as one of his most prominent scholarly endeavours. However later an obituary on Müller published on December 8, 1900, by Scientific American magazine mentioned that Müller took full credit of translating the Rig Veda, but actually he did not work on it and instead paid another unnamed German scholar to translate it.

He was elected as a foreign correspondent (associé étranger) to the French Académie des Inscriptions et Belles-Lettres in 1869.

He was against Darwinian concepts of human development and asserted that “language forms an impassable barrier between man and beast.” He gave a short course of three lectures on the subject in 1870 for the British Institution. It was titled ‘On Darwin’s Philosophy of Language’. He even sent copy of such lectures to Darwin in 1873 mentioning that although he was against some of the conclusions made by Darwin, but he was a diligent reader and sincere admirer of the English naturalist, geologist and biologist.

He was conferred the order of merit Pour le Mérite (civil class) in June 1874. His remarkable achievements in the field of science and art were recognised by awarding him the Bavarian Maximilian Order for Science and Art the following year.

He made English translation of the first edition of the book ‘Critique of Pure Reason’ by German philosopher Immanuel Kant and published it in 1881. Müller was influenced by Russian philosopher African Spir’s work ‘Thought and Reality’ and Kant’s Transcendentalist model of spirituality.

During the 1880’s and the following decade, Müller delivered several other lectures that were more in favour of Indian literature and Hinduism. While giving the lecture ‘What can India teach us?’ at the University of Cambridge, he advocated for the age-old Sanskrit language and praised India for the beauty, wealth and power that nature bestowed the land with. Through another lecture ‘Truthful Character of the Hindus’, Müller suggested that the psyche and behaviour of Hindus were greatly impacted after the emergence of Islam during the 11th century.

Noted Indian Hindu monk, Swami Vivekananda, a chief disciple of Ramakrishna Paramahamsa, was fascinated by Müller after he met the latter and his wife over a lunch on May 28, 1896. That year Müller was inducted as a Privy Council member.

He proposed and advocated the concept of a Turanian family of languages that included the Finnic, Tungusic, Mongolic, Samoyedic and “Tataric” (Turkic) languages.
Scholarly works of Müller also include ‘Chips from a German Workshop’ (1867–75, 5 vols.), ‘Introduction to the Science of Religion’ (1873), ‘The Science of Thought’ (1887, 2 vols.) and ‘Six Systems of Hindu Philosophy’ (1899). He also penned down Biographical Essays (1884), a memoir ‘Auld Lang Syne’ (1898, 2 vols.), and ‘My Autobiography: A Fragment’ (published posthumously, 1901) as well.

In 1855, he became a naturalised citizen of Britain and on August 3, 1859, he married Georgina Adelaide Grenfell. Together they had four children, namely Mary, Ada, Beatrice and Wilhelm Max, among whom two predeceased the couple. Wilhelm also grew up to become an orientalist.

Müller passed away on October 28, 1900, at his Oxford city home and was buried on November 1, 1900 in the Holywell Cemetery. Following his death, a memorial fund was created at Oxford to promote research and study of Indian history, languages, literatures, archaeology and different religions. The papers and documents of Müller held by his wife were later kept at the Bodleian Library in Oxford University.

The Goethe Institutes located in India are named after him as Max Müller Bhavan. A street in New Delhi, India, was also named as Max Mueller Marg in his honour. 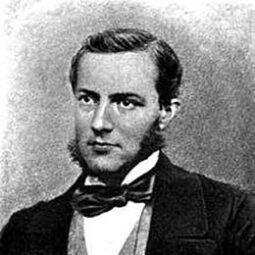