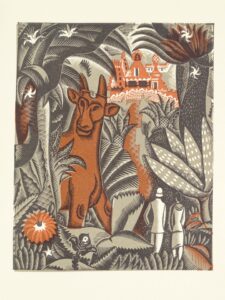 Maurice Magre is a French writer, poet and playwright. He was an ardent supporter of Occitania, and did much to publicize the martyrdom of the Cathars of the thirteenth century. For his historical novels about the Cathars, Maurice Magre fits in the tradition of the historian Napoleon Peyrat, in the sense that the author often prefers legends and romantic epic rather than historical truth.

During the first part of his life, he led a bohemian life and of debauchery which led him to become an opium addict. He experienced all pleasures, sought all ecstasies. Despite a growing bad reputation, however, he became a famous and popular author. On the occasion of the publication of one of his books in 1924, Le Figaro wrote: “Magre is an anarchist, an individualist, a sadist, an opium addict. He has all the flaws, he is a great writer. One should read his work.”

In the second part of his life, he became interested in esotericism and leads a spiritual quest, which led him to publish many books, as evidenced by the long list of publications.

In 1919, he discovered The Secret Doctrine, the major work of Madame Blavatsky, co-founder of the Theosophical Society.

In 1935, though he was ill, he traveled to India to meet Sri Aurobindo in his ashram located in Pondicherry.

In July 26, 1937, he founded with Francis Rolt-Wheeler, the “Society of Friends of Montségur and of the Holy Grail.”

Maurice Magre rests in the cemetery of Terre-Cabade in Toulouse where one can see his grave.

Maurice Magre is the brother of Andrew Magre (1873-1949), who was secretary-general of the presidency of the Republic during the entire term of office of Albert Lebrun.