She gives a familiar and intimate account of his daily life, character, and habits. She is naturally her father’s partisan in all quarrels that he had. But there are facts and points of view in this book that can be found in no other work. To those who have read Dostoevsky’s novels these new and intimate revelations will be of keen interest, but even if one has never read any of the novels, this biography is written in such a manner as to hold the attention of the reader from beginning to end. 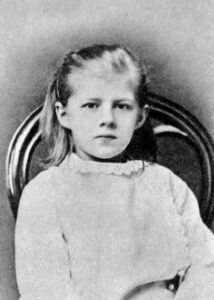 Lyubov Fyodorovna Dostoevskaya (1869–1926), also known by the name Aimée Dostoyevskaya, was a Russian writer, memoirist, and the second daughter of famous writer Fyodor Dostoevsky and his wife Anna. Their first, Sonya, was born in 1868 and died the same year.

Lyubov never married. Later in her life she became estranged from her mother and moved out of their house. In 1913, after a trip abroad for medical treatment, Lyubov decided to stay there, and she lived abroad until her death in 1926. At that period she was also known by the name Aimée Dostoyevskaya. She died in Italy of pernicious anemia.

Although Lyubov Dostoevskaya was Orthodox, the funeral rite was Catholic by mistake. A simple wooden cross on her grave was soon replaced by a small porphyry tomb. In 1931 Italia Letteraria magazine suggested that since Dostoevskaya was buried in Italy, it was the Italian government that should establish a memorial.On December 1931 a granite pedestal was constructed, with an epitaph written by the editor of Venezia Tridentina magazine. Resting place of Fyodor Dostoevsky’s daughter in Gries has been preserved after cemetery reconstruction. Her tomb was moved to Bolzano city’s cemetery in 1957. 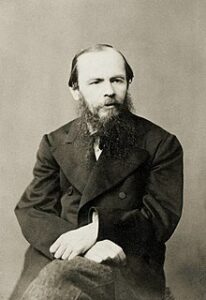 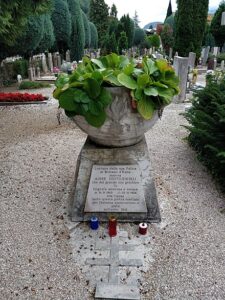 Lyubov Dostoevskaya is best known for the book Dostoevsky as Portrayed by His Daughter (German: Dostoejewski geschildert von seiner Tochter, also known as Dostoevsky According to His Daughter), originally published in Munich in 1920. Her memoirs, written in French and published in German, were later translated into other European languages. In 1920 the book was released in Dutch (in Arnhem), the following year there were translations into Swedish and English, and in 1922 it was published in the United States and Italy. A Russian version, highly abridged, was published in 1922 by Gosudarstvennoe Izdatelstvo (Saint Petersburg) under the title “Достоевский в изображении его дочери Л. Достоевской”.

The work contains many factual inaccuracies, partly because Lyubov was only 11 at the time of her father’s death, and partly because she based the memoirs on her mother’s stories. Many researchers tend to see this memoir as subjective and unreliable, citing as an example her bias in the description of the relationship between Dostoevsky and his first wife, Mariya Isayeva. Both Lyubov and her mother Anna expressed hatred towards Isayeva. 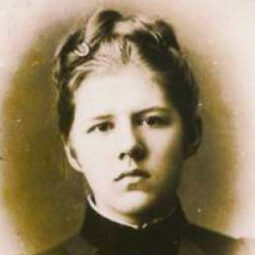